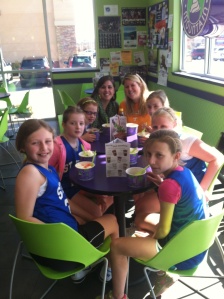 Most of our team at Yogurt Mountain

Today marked the final game of my church basketball season. Coaching 3, 4 and 5th grade girls is definitely a unique challenge in and of itself. I have no girls on the team and barely remember what it was like to be in that age group. But after deciding I wasn’t coming back this year and then being coaxed back into it, I am so glad I did.

My dad has coached our church basketball team for something like 25 years. He never ages up, always coaches the Kindergarten, 1st and 2nd grade girls. He is beloved to say the least. People used to think he had a daughter on the team and nowadays a granddaughter, but he just does it bc he loves little girls and watching them grow as players. He’s silly and patient, but most of all, a great coach. So I was thankful to work with him for two years before they asked me to coach the next age group up.

To be a great coach like my dad, you have to be a good teacher, be fair and above all, teach girls what it means to play in a Christian atmosphere. I’m a firm believer that winning isn’t everything but I also don’t want to be that parent that never lets their child fail or succeed at something. Participation trophies are great, but I don’t think kids discover their strengths and weaknesses without a few failures here and there. One girl might not be great on the basketball court but can play an instrument or dance ballet better than the average person. Still, I try to treat each girl as though they are the best and teach the importance of team work. I don’t have a star nor reward ball hogs.

Last year, my team lost every.single.game. It was hard. I was a first-time head coach and there were some struggles on multiple levels. Winning isn’t everything but it sure would have been nice to have won a few. Still, we had fun. We dressed up in feather boas and I made valentines and Christmas cards and we learned lots of new skills. This year, I had several girls return. One wasn’t planning on playing this year until she heard I was the coach again. This girl in particular is special to me. I’ve coached her four years now and she is the smallest on the team. Anyone who says basketball is a tall man’s sport has never met this little girl. You’ve never seen her out-rebound her much taller peers when I asked her to play forward. You’ve never seen her score the first six points in a game against an entire team of taller players. And you’ve definitely never seen her play defense. Her size is an advantage as a defender bc the ball is right at her height to seize and other players can’t get as low as she when guarding her. Her size is an plus, not a challenge.

My sister coached with me this year and it was such a different experience from last year. We had a blast, planned out our practices and lineups, laughed a lot and the girls enjoyed our closeness. When she announced she was moving home from Charleston I was excited to think we could coach together. She is the much hipper, cooler sister so some of the girls loved her pretty nails, silky hair, stylish clothes and jewelry to my frizzy mom hair and yoga pants. We made a great coaching duo.

Somewhere this season, we started clicking as a team. Girls who had never played before were getting the hang of man-to-man defense. We had two French girls whose native language was not English. The first few weeks, one’s mom was translating everything. But the last few weeks, the girl would ask me if she was playing forward, what quarter she would be going in, where she would stand for jump ball and so forth and so on. She quickly caught on to not just the English words but the basketball vernacular.

We won the first few games and what a great feeling it was. Not because I want to beat another team, but because I wanted the girls to know how it feels to play well and be rewarded with a W. When they worked together, it was beautiful. We set picks, had in-bounds plays, had a three-guard offense, a half-court press, assists, steals and shots from downtown. If we ever had a ball-hog, it was when my eyes were closed. Nothing made me more excited than to see a ball exchange hands three or four times and a shot go in. Teamwork for me is just as thrilling as a win.

We won one game 3-2 and sadly, it was against our own church (we had two teams in the league). Even though it was a “w” I wasn’t very proud that game. We just didn’t gel, and the score reflected. Yet we lost a few games and I beamed with pride. There were teams with 14 girls to our 6 (two were absent those games). There were teams with tons of 5th graders to our 2. There were teams whose shortest player was bigger than our tallest. We were vertically challenged, underage and small team. We had eight but had more games than not without a full roster. Yet somehow we came out 5-3-1

Today, I almost got ejected from the game. I am a very emotional coach. I take it seriously. I fight for my girls. None are my favorite and none are less important. Today we played the team we tied previously in the season, so emotions were high. Sadly, we were missing two of our players who would have made a big difference. We only had six and the other team had 10. They had at least five players taller than our tallest player. I had to call time outs just to give the girls a breather. AT half time, we didn’t run drills or practice. We just had a pep talk and I let the girls catch their breath. They were all basically playing the entire game.

This year I’ve seen the negative side of competition and what parents do to their kids in order to win and be competitive. It’s really ugly and there are sadly coaches out there who will win at any cost. I’ve never understood letting your less experienced players play the least, because they won’t get any better. Your team won’t grow and the players won’t either if they don’t get playing time. So I’ve always tried to take turns letting different players start, bringing out my best when we have a good lead, trying to make sure at least a few different people can score or make assists in the game and so on and so forth

Today’s game was one where I had some problems. There were 10 players on the other team and I rarely saw more than 6 different girls playing. At the final prayer I swore I saw girls that I didn’t even know were on the team. Their best players were pulled for a few minutes total and they were out to win

One of my girls was repeatedly hurt and fouled by a much bigger girl. Finally, in the last moments of the game, the aforementioned bigger girl slammed her arm down over top of my girl, in what I thought was unnecessary roughness at the least. To me it seemed intentional. I erupted. I stood up and screamed. For that one hour, those are my girls and no one can hurt them. Basketball is a contact sport for sure, and I have scars and kneepads to prove how much time I spent on the ground and in contact with others. But I can’t stand by and watch players intentionally foul or use force that is just not necessary. I stood up and screamed at the ref. He replied that he called the foul and what else could he do. I wanted him to warn the coach that their girl was too rough. We’d received such warnings before and this was about the 10th time in the game I’d had to witness some excessive fouls and contact.

The ref told me to sit down and shut up and they could play the game without me. He threatened to kick me out. I said that’s fine, but I’m not going to watch my girls get hurt. In that hour, they are under my care and it’s my job to keep them safe. I can be hard on them, and yell and scream, but I won’t let others hurt them. After the game, the ref came and apologized to me. To say I was emotional was true. I wanted to win but with six girls, we came up short by one basket. My girls fought tooth and nail and played their hearts out and were just plain exhausted. They played the whole game and left everything on the court. Again, I couldn’t have been more proud.

Because the other team was foul-happy, we were in the bonus in the second half. When my best shooter went for her 1-1, the other team was chanting and making noises like you might hear at a college or high school game to throw her off. Real Christian-like I thought. She made her shots and I smiled inside.

Although we lost, I still won. After the game a man I’d never met came up and told me how much he thought of our team, my coaching style and the way we played. Then another man who was keeping score came up to tell my dad and me (not knowing we were related) how much he thought of our church and our teams and the way we played. He had known my dad for years. To say he’s kind of a celebrity in the church basketball league would not be a stretch. I’ve repeatedly seen refs and other coaches praise him, and I can only hope I’ve got an ounce of what he teaches as a coach. The gym’s scorekeeper said everyone on our team was so positive. I wondered how he could think that with my yelling and near technical foul, but I was elated to think that others could pick up on how we coach and play as a team. It was a random act of kindness, to receive a compliment from a stranger, about my volunteer job.

Afterward my sister and I treated the girls to Yogurt Mountain and they seemed completely unfazed by the loss. We took silly pictures and talked about the season and laughed at things third, fourth and fifth graders talk about. I sat back and looked at how much fun we were all having and knew that we’d had a good season. Win or lose, they all grew as players, made new friends and experienced the highs and lows of competition. I will never be like some of those coaches and win at any cost because I don’t think it helps anyone. We aren’t paid, our salaries aren’t dependent upon our wins, and God is our ultimate judge.

I am so thankful these girls wanted to play for me and gave me the chance to be their coach. I only hope they enjoyed it as much as I did. 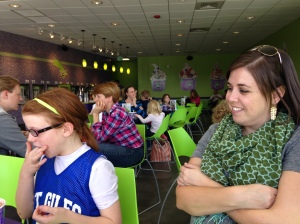 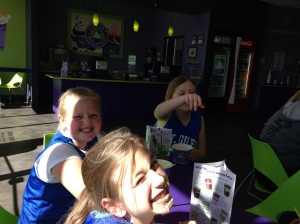