It’s funny when I talk to people about doing this triathlon in a couple of weeks and the reactions I get. Most seem to say things like “oh better you than me,” or “good luck with that,” but the ones who are already athletic and in shape, seem to “baby” me or try to give me some kind of confidence boost as though I’m probably going to fail. They don’t do it intentionally, I don’t think, but it drives me crazy. In short, because I am overweight, they think I am taking on more than I can probably do, and therefore, need some confidence. What they don’t know is that fat or skinny, I am not someone who gives up and is not afraid to come in last. I am, however, afraid to never try.

Recently, I’ve upped my workouts to 5-6 per week. That’s an achievement for anyone, in my opinion, much less someone who holds down a 40-hour a week job, has two small children, commutes 45 mins each way and still gets meals on the table at night for their family and tucks the kids into bed. Most days, my hair does not look as pretty as some of the other girls in the office (does wetàdry-on-the-way-to-work count as a hairdo?), but I am at least dressed in my business attire. I’ve been skipping lunches with friends to do Zumba or the treadmill. I’ve given up watching my child at gymnastics in order to take long bike rides. I’ve done two 5k events in less than a month. So needless to say, I am really taking this thing seriously.

Up the swamp rabbit race!

Trying to enjoy biking. My least favorite part of the race. 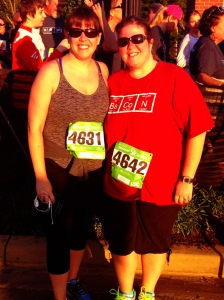 But it annoys me when people look at me, and judge me by my size, so as to say and think, “well, do you really think you can do a triathlon?” Sure, I may not look like a svelte athlete, but the whole point of this is to get healthier and have a goal so that maybe one day I will! Because not having something to work toward is much harder for me to stay on track. Most people I know would probably never even sign up! This way, I have an end in sight, until the next goal.

I’d be lying if I wasn’t nervous. The bike portion alone keeps me up at night because the course must be done in 2 hours or less. And adding up my 5k time and bike time (not counting if I have to get off the bike and push it uphill), I am going to be quite close to the 2hr mark.

Last Friday night after work, I wanted to go home and eat pizza and hang out with my kids and supportive, awesome hubby. But I biked a hill workout and then went to swim. The man I shared the pool lane with was very nice and encouraging (we chatted about swimming a little bit and what not) but he kept condescendingly saying things like “well, I’m glad you’re getting back out there and trying. Even if you don’t finish, at least it was a start.” Which yes it’s true but who says I won’t finish? I can see it in people’s eyes and hear it in their voice, that they think I am less of a competitor. It really is annoying. I know they are trying to be encouraging and helpful, but really, I just feel sorry for people who think that because I am fat I will fail and give up. They didn’t know me as an 8 year old swimmer who swam the longest and hardest events in swim team every meet. They didn’t know me as the girl who was so aggressive in basketball I had to wear knee pads and fouled out many a game. They don’t know that this is in fact my fifth triathlon, and I sucked at the previous four, but I still did them. I am a hardworking, athletic person, no matter my size, and do not ever give up. As I say all the time, “you never know unless you tri.”

Ive recently taken on a bold goal of training for another triathlon. It is 3.5 weeks away and i’m as nervous as i was the first time i did one back in 2006. I’ll be the first to admit my training has only been ramped up the last two months from 2-3 days a week to 4-5, and even more, this last month (5-6 days a week). So it may be a long shot that i even cross the finish line in 2 hours (the given time limit).

But the triathlon is more about an overall goal to be healthier than it is to do a fitness race, because let’s face it, i’m only shooting to cross the finish line. The competitor in me realizes i will be the fattest girl out there so i’m not trying to beat anyone. But oh well, you never know unless you Tri!

But because i know after the triathlon I will be very reluctant to want to work out (hence having the goal),  I’ve decided to simultaneously start another challenge as well, the #WorkitOut100 challenge. This is a challenge to work out 100 days in a row. It’s a pretty well-known initiative that I encourage people to look into. Obviously some days can be easier than others, so I’ll need those “rest” days to be a little easier (ab workout versus a 15-mile bike ride) But i’m thankful that my work makes it really easy to work out and I’ve met lots of people who enjoy working out so that i can have different people to join me on my journey.