Sometimes Christmas letters or blogs can come across as extremely self-righteous and narcissistic. And maybe mine is and I don’t even realize it. In church a few weeks ago the pastor preached about how so many Christmas letters only seem to brag about their kids, their trips to X places, their jobs, their material things, their this’s and their that’s. I tend to agree. Even my own parents’ Christmas letter read that way to me and I know they are not pretentious or bragging. They were just sharing the news of their millionth cruise and latest wine excursion (That was also a cruise) and yes, I am jealous. I can only hope when I retire I will be able to do the things they do. But they work(ed) hard and play hard and when they are home they are quick to babysit my son and do nice things for us. And then the rest of the time they are off at Tenn games and cruising around the world.

A friend of mine’s year-end review posted more memories and experiences rather than just a list of expensive trips and things that won’t be used a year from now. I feel like that is more in line with how I’ve been feeling lately. Not to say any of the other is bad or negative, but I’ve just been trying to savor some memories lately because I feel that I moved too fast by many of them and spent so much time wishing for change in the early part of the year, that in some ways I might have missed something. So reflection is good.

Right around January my son turned 6 months and I can say that it is then that I finally started to feel like my old self. I love being a parent, but I don’t think I had any idea how hard it was in regard to taking over your entire self. Not just physically, that part was pretty easy, but mentally. There are so many struggles with being a new parent that no one tells you about or talks about. There are doubts and questions and times when you think the day will never end and he will never stop crying. There are times when I wondered why wasn’t he crawling or walking or doing this or that. There was the stopping of breastfeeding after 5.5 months and wondering if it was okay to stop? Then there was weight gain after stopping, which made me even more resentful.

There were the many months of praying for God to bring a new job to my husband, and He finally answered our prayers in May. But thankfully I had some friends and LOTS of family who helped me when I needed it most. I coached basketball and had a church friend take care of my son in exchange for my driving her daughter to practice. This helped us both tremendously. Getting to coach with my dad is an experience I am so glad to have had. Our little K, 1, 2-grade girls’ team was something I am grateful to have been a part of.

Another awesome experience this year was a sister trip. My sister is easily my best friend, outside of my husband, and we have talked about wanting to do a sister trip for a long time. We finally made it happen this year with a trip to Savannah. It wasn’t luxurious and was quite affordable but we made some awesome memories through our silly laughs, inside jokes (woman with a scarf!) and some fantastic food and shopping. But mostly, it was just a great way to bond somewhere away from home and experience some history while also making some.

My hubby and I got to go on a great kayaking river day trip this year ending in a friend’s back yard and went to the lake a few times on my parents’ boat. We treasure the outdoors so these were also great experiences. Another new-found love was the Swamp Rabbit bike trail where we spent Saturday mornings biking and showing our son the not-so-pretty side of our city. My sister and I found ourselves front-row at a Phish concert, something that never disappoints, and also found ourselves cheering on a very disappointing season of the Tennessee Vols. On the flip side, I did get to enjoy two Clemson games, who did NOT disappoint. But my allegiance to the Vols will never waiver.

In one year my son learned to crawl and walk, much later than most, but these were big highlights. He got a few teeth (still only four!) and we taught him sign language. We read the same books over and over and over again until I have them all memorized and can read them without even needing the book. We began eating real foods, brushing teeth, giving kisses on command, throwing balls around the house and loving to swing. We went trick-or-treating and met Santa and the Easter Bunny. He busted his lip, cried so hard he burst a blood vessel and showed me that his form of venting anger is to hit me in the face. The latter is something we are still working on. Mostly, he became his own little person this year and left the days of babydom behind.

He was also baptized in February, wearing the same gown I wore and my grandfather wore. My husband joined the church that same day and we have been regularly attending each week. I am even coaching church basketball again!

Perhaps one of my favorite experiences this year was getting to officiate a friend’s wedding. It was a challenge yet felt natural once it started and was an honor to perform. It was also our first extended road trip with my son for five days away and two time changes. Somehow, we prevailed, albeit many times we forgot things here and there and had to pull over for poopy diapers and dropped pacifiers.

There were many other highlights, such as getting to dress up like a westerner for a friend’s birthday in Cherokee, NC., having all my friends over for an 80s murder mystery party, meeting a friend for an all-day wine lunch, going to the wedding of my brother in law, celebrating Christmas three times, celebrating my 4th year of marriage and 35th year of life, and lots of other celebrations. But mostly it was a year, like all others, where there are highs and lows and memories being made. My resolutions are fairly simple this year…to try and be less messy with my never-ending laundry pile; (My husband even built me a closet to curb this bad habit.); To try and look less frumpy around the house. And to try to enjoy things as they happen.

Biking on the Swamp Rabbit 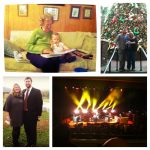 Rafting down the Saluda

Getting a new sister