My sister and I are six years apart. As a parent, I can completely understand my parents reasoning behind having kids that far apart. By the time my sister I was born, I could read, feed myself, bathe myself, put myself to bed and even watch over my sister if my mom needed to step out of the room. Heck I was even in kindergarten so it was almost like she only had one kid for most of the time.Within a few years I could help change her diapers, play with her and give my mom a break.

But also within a few years, she became the most annoying thing on the planet to me. She would bite me (“bite her back” my dad said as I cried) scream in my room, knock on my door to play, follow me around, ask me to drive her places, ruin my weekends because I wanted to be with friends and had to babysit, and do all the things that someone six years younger would do. What did we have in common? Nothing.

My parents made us to go Tennessee EVERY.SINGLE.WEEKEND. in the fall for 18 years. They went to the Tennessee games and we stayed with our grandparents. Those 3.5-hour-car rides with her were often brutal. We were enemies for much of my life. In church my dad had to separate us and we often would antagonize one another just for the sake of being annoying.

Yet somewhere during college, she entered high school, and we had some things in common. At some time, I cannot remember when, we became friends. We could tolerate one another. She started mimicking me and doing things I liked to do. Her musical interests were close to mine. In fact, I came home from college one weekend for a Phish show and she was there, not with me! I wrote her letters from college and learned she was becoming her own woman. Not the bratty sister I remembered. As she came to visit me in college, she being only 15, my friends took a liking to “little bac” and treated her with the same respect they showed me. I had to remember she wasn’t a bratty little girl anymore.

After I returned home upon graduation, we got an apartment together. She was on her own for the first time and in some ways, I was too. I was back in Greenville, graduated, trying to figure out where to go and what to be in life. She was going to technical college doing the same. Somewhere in those days of take out (did we ever cook?) and parties and laughs, we became best friends. We started to realize that our lives weren’t that different, we’d just lived them at different times. Mom and Dad did the same thing to me that they did to her, well at least most of the time. And we got in the same type of trouble and had the same punishments, most of the time. We started forming inside jokes that now make us laugh until we cry to think about. We became annoying to other people, most notably my husband, because we act like five year olds around one another. And we fight sometimes, but like all siblings, we make up within minutes of petty arguments over boys or who stole someone’s this or that.

Today, in my mid-30s and she nearing 30, we are the best of friends. We talk daily, laugh daily and know every detail about each other’s lives. I cannot imagine not having a sister. As my husband and I talk about planning for another child, we have never considered NOT giving our son a sibling. As much as I think it would be good to wait several more years for another kid, I realize we probably need to think about planning for one sooner than later (But still not anytime soon!) because my son needs a brother or a sister to beat up, hug on and protect.

As an older sibling, I am very protective of my sister. I am there when she gets her heartbroken and there to celebrate her successes. Today she was named Employee of the Year at her job and I could not be more proud. When she falls, I will pick her up. I love being a sister and wish everyone could experience what we have. My husband thankfully is a good sport and so is my sister to both be around me and love me. The three of us have taken many trips together and it is always an adventure. My husband has lovingly adopted my sister as his own, and my sister treats him like a brother. They have a true sibling bond.

Then I got pregnant, my sister was the first to know—even before my husband! (I was waiting for a creative way to tell him). When I had my son, she instantly transformed before my eyes and became this selfless caring person who so generously gives of her time and love to my son. She is the most proud aunt I’ve ever known. She has yet to come home without a giant bag of clothes every time she visits. She calls to Facetime with him and shares in his first steps, words and solid foods. She is a proud auntie. Her desk at work looks like a shrine to him.

She stood beside me on my wedding day and I cannot wait to do the same for her one day. I cannot wait to celebrate all of her big milestones and just want the world to know what amazing joy it brings me to have a sister like her. I love you Stephypoo! 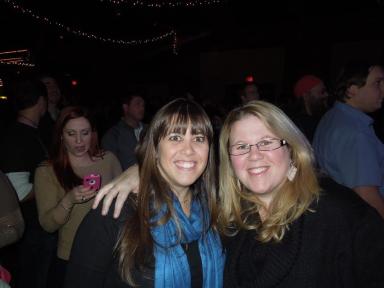