Parenting a toddler is by far not my favorite age. While there are many joys at this age (20 months) there are also many challenges. In such a short span, I feel as though this stage has lasted the longest. I enjoy the sweet kisses and hugs and the moments he wants to snuggle, but those are few and far between. Meltdowns are quite the norm and tantrums, as much as I try to avoid them, are inevitable. And it seems to me that there are far more traits, or lack of traits, that comprise a toddler’s everyday life.

Patience. This word is nonexistent in my toddler’s life. Everything must be done at this. Very. Moment. If he does not have the toy or music he wants, all hell will break loose. Enter hard decision-time: give him what he wants at that instant and soothe the screaming headache that has just ensued, or try to teach him aforementioned word patience and do not give in. My jury is still out. It seems I am about 50/50 on this one. Some days I give in, some days I am Shee-Ra and can withstand the torture I am undergoing. I know it needs to always be the latter, and I certainly try, but somedays after a long day of work I think, “letting him watch his sign language video one extra time is not the worst thing. At least he SIGNED to me he wants to watch it “again”

Vocal Control. This is also something a toddler can’t seem to figure out. Being dissatisfied seems to equal screaming at the highest decibel possible. Sometimes I scream really loudly back, just to see what his reaction is. I don’t scream AT him, I will just let a loud noise escape my lips and typically it is enough of a distraction he forgets what he was crying about. I, on the other hand, look incredibly dumb but to be honest sometimes the yelling helps get out my frustration as well.

Super-human Strength. Toddlers seem to possess this amazing ability to NOT let you change their diaper. I don’t know if it’s because I’m trying to safely pin him down with one arm that leaves me unable to wrestle him with the other arm, or if he is really that strong. He can shoot his legs out straight to absolutely NOT allow clothes to go on or a diaper to be fitted in between these iron legs. When he is running from me, I swear he turns into RoadRunner and is able to outrun me in a circle around the house. Perhaps it’s because he’s lower to the ground and can take a sharper turn around the staircase than I, but somehow it takes two of us to put his coat on in the morning.

Fickleness. One day we love Elmo, the next day it’s Elmo who? What worked one time with a babysitter is now as successful as my Facebook stock. (sigh). Our bedtime routine was air-tight and solid. We told ourselves how lucky we were to be in this situation. Within a matter of weeks and new-found interests, our son hated every book he’d loved the day before, hated his “favorite” blankie and wanted a puppet show before bed, something we’d never done before. Typically, every afternoon is a guessing game as to what kind of mood he is in. It reminds me of some guys in my past lives…

Deciding mommy makes a better sticker page than the book. 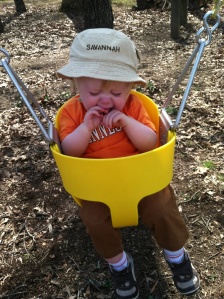 Even though we swung for a while, this is his reaction to no more swinging.

Somewhere in all this mood-altering behavior I’ve read that the repetition is what makes them feel safe and comfortable, the fickleness is due to their minds developing and expanding their interests, the strength means their bodies and minds are growing, the vocals show their independence and the lack of patience is just because in their head, they think the world is ending or they’ll never get something again if I don’t give it to them. Disciplining, I’m sure no matter what the age, is hard. REALLY hard. To ignore your child when they want you or to tell them NO for their own good is not my favorite thing. But neither is the demands of someone with no attention span.

So I guess in all my complaining, I really have to take a step back and think this stage is really about raising a son who feels safe, whose mind and body are developing, who is becoming independent and who is asking for something that they love. Those things really aren’t so bad when I think about it this way. 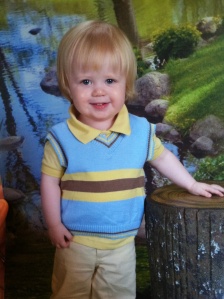 How do you discipline this sweet face?

I just need to remind myself of this the next time I’m singing “Old MacDonald” out in public like it’s my favorite song on the radio.