My mom taught me to write thank you notes whenever I was given a gift. This tedious chore became something I loathed doing until I became an adult and realized that the simple minute it takes to hand-write someone a note of gratitude, is really more fun than it is laborious.

So to echo my mother’s wishes, I feel that I must write you a thank-you note. For you have given me a gift I can never repay nor re-gift to anyone else. As a copywriter, I find it hard that I cannot even describe what your gift has meant to me in words, but rather it is more of a feeling that coexists in thousands of other happy recipients.

As a 17-year-old girl, I often found myself wondering where I fit in in high school. Music was ingrained in me from an early age as a classically-trained pianist and later a saxophonist, guitarist and banjo player. I was given a Phish tape by a good friend and all of the sudden, my ears were pried from my head and opened in a way they never had before. The classical textures became immediately apparent yet intertwined in some weird rock juxtaposition known as Divided Sky. I had a hard time understanding what I was hearing because it was everything I’d learned about music, but twisted on its side a little bit. I hit repeat many times and wondered what this music was. I felt smarter, enlightened and naturally high all at the same time. I sat on the floor in my 11th-grade bedroom, punctuated with Led Zepplins’ “IV,” some Paula Abdul cd and a myriad of mixed tapes, and turned up the radio in my JBL headphones. This was why my mom made me take piano for 12 years, I instantly thought.

The next year I felt as though I had a secret and only a few seemed to know it. I spent my senior year trading tapes with guys (where were the female phish fans?) in parking lots, very stealth-like, so that no one would be in on our clandestine efforts. It was almost as if I was doing something far more sinister or seedy, but alas, I was learning the importance of Maxell XL IIs, how to properly write a > and a new vernacular of acronyms like HYHU, MFMF, YEM and MMGAMOIO. I went to a magnet school for writing where I met other music friends with similar interests but then returned to my public school for the other half of the day, with very few who knew my secret. Music seemed so boring, so unoriginal, unless it was you or a few other bands.

I could never have enough Phish and needed my fix before, during and after school. Soon, I became prophishcient in the music and learned why Amy’s and Ian’s farm shows were so important, and why B&Ps were the best example of karma. I also learned to not speed up an audio tape when making copies, and on the few unexpected days I would receive a 1st or 2nd-gen tape, I knew to treat it like gold.

When I finally saw you in person, from high above in the balcony, I “got it.” I had already gotten it from those months of rewinding a killer Bowie and memorizing the entire intro and outro of Divided Sky on my guitar. But seeing you live touched me way down deep. More than anything else, you awakened me. It was unlike anything I’d ever encountered, heard or seen. An environment where people understood my secret and were thoroughly enjoying themselves in a way I could never do at a high-school party of my so-called friends. Conversing about new clothes or a cute guy who didn’t even know our names was not nearly as fun as listening to a 20-minute YEM.

Finally, I went to college. For this is when I should have really thanked you. This is when our relationship blossomed and we were in sync. These are the years of 4-song second sets, the ‘97 space funk, the summer of covers (SABOTAGE!), the Velvet Underground Vegas and the ultimate memory for me, Big Cypress. These were the years I met friends who to this day are my closest because they traveled with me to far away places and crammed in tight spaces to hear you play. These friends (now many more than high school) and I all understood the unspoken language we phans speak. For they too had Maxell XL IIs; they wore shirts with parodied movies and logos that reflected your song titles; they knew when to clap in Stash.

As I went to more and more shows, I would look around and see that my group was not uncommon. Lots of Phish fans have these groups of peers that travel together, form memories together and have those few standout shows that will forever be in their memory. Mine from this era is of course Big Cypress, but the reason for my letter today is 14 years later in Chicago.

just some of my tapes

While you disbanded for the second time (well the first was a planned hiatus so not sure it’s really counting as disbanding) you guys had to grow up, and I had to “grow up.” My dad used to ask me that all the time. He loathed the fact that I had more ticket stubs from Phish shows than I did cute outfits. He once called my ticket stub scrapbook a receipt book for all the money I wasted. To me, it was an instant photograph of memories. But during your time away, I guess I did grow up. But I did not grow out of love with Phish. I met a man I later married, who did not know of your greatness but has since been converted, and I bought a couple houses, found my dream job, had a kid and became more “normal,” I suppose. But I still have my wooden, 100-compartment tape deck, my Radio City poster, my Billy Breathes sheet music book and all the other memorabilia that makes me feel 19 again. People tell me they got rid of their tapes, their CDs even, and are now completely digital with their Phish catalog. But I cannot ever part with those tapes. All those hours of mailing B&Ps, writing out the J-cards, trading in the parking lots and getting excited to get a 1st gen tape leaves me unable to just throw them away. Like today’s newspapers, I recognize Phish tapes are a dying medium for listening to music, but I still have them and every now and again pull one out. 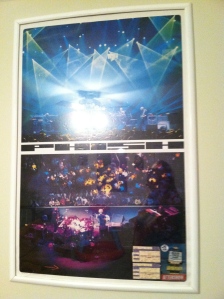 This is your 30th Anniversary tour and I guess I can say that it is our 19th year together. Of course you do not know me really, but I like to think you think about me every now and again when you do things like reimburse your fans for a weather cancellation that wasn’t your fault, or involve me and the other thousands like me in your “gags” or audience participation-type songs. Clearly I’ve been on your mind once or twice. Or at least the idea of me. I am sometimes the fan on the front row and other times, just a face in the crowd. And we have even met face to face a few times in the past. Those are some special memories I will always hold. But as my prose grows rather lengthy, I just want to say thanks. Especially for this past weekend.

My husband and sister and I flew to Chicago to meet with others in what I can call a newer “group” of friends who are in similar or equal places in their lives. Some are newlyweds, singles, friends with kids, but we are all 30-somethings trying to hold on to our salad days when we could traipse around the country and see six shows in a week  with no serious repercussions. Tickets were $20 and motels were cheap. We spent long hours in a beat-up Buick, praying it wouldn’t overheat and would safely get us to the next show. We slept at rest stops and Knight’s Inns 8-people deep. We munched on veggie burritos, garlic grilled cheeses while washing it down with a cool, Sammy Smith Oatmeal Stout.

Today we rent suites, take limos to shows, dine at steak houses and spend $70 on tickets, $300 on airfare and sometimes just go to bed after the show. Sometimes! We may only see one or two shows a year, but man is it worth it. We know the shows we get to see are few and far between, and real life comes calling for many of us around 6 a.m. on Monday morning. Having a baby and going on tour doesn’t really mix for  some of us and I wouldn’t change it. Because I thankfully have that ticket stub book that gives me a lifetime of memories packed into 19 years. 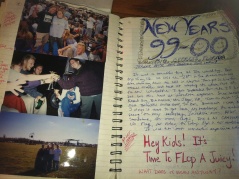 But back to the Windy City. I was fortunate enough to have floor tickets and grandstand tickets. I never even saw the lawn people really. But I know they had to have fun on some level as well. Somewhere during the five sets I saw I felt 21 again and back at Big Cypress. There was something special in the air. At 35 years old, I would probably not stand in the rain for hours for anything else but Phish with my friends. After the Saturday night rain, Sunday’s was almost comical. My poncho needed a poncho. There was nothing you could do but stand with a big shit-eating, Trey-like grin and dance with the thousands of other wet people. We embraced it, and Phish kept playing for us, knowing there was no way they could cancel again.

I got to hear Harpua, finally, and some old gems that I never hear much. I got to hear an absolutely stellar Piper, a ridiculous My Friend My Friend, a silly Meatstick that reminds me of MSG and Big Cypress and is always quick to put a smile on my face. I saw my friend’s Dinner and a Movie sign finally come to fruition and reveled in his happiness of hearing his first, at 170+ shows deep! I hate to remind him that I heard it at my first show, 18 years ago.

Chicago was for starters, a logistical nightmare of sorts, but in the end, a magical place of stellar music, good memories, and reminders of why I’m still following these four guys (well five, can’t forget Kuroda!) around the country. Who needs Disney World! I can find happiness on Earth in the middle of the USA, soaking wet, singing about a possum. To look to your right and left and never have to speak but see people who also “get it” reminds me of being 17 and having my ears opened for the first time. You don’t get that at just any show.

So Phish, thank you. Thank you for helping me know who I am. Thank you for molding me and showing me a light, or path, to a different level of living. But thank you mostly for continuing to play, to write, to be a band and keep people like me entertained. I get so frustrated at the people who complain about flubs or misses here and there. You are all human and humans are not perfect. I’d hate for someone to scrutinize my every move and expect perfection like some fans do. You entertain me far more than you make mistakes, and again, I thank you. I may not see you again this year and I’m okay with that. So thank you for giving me a weekend unlike anything else. Thank you, Thank you, Thank you.

2 thoughts on “Dear Phish, Thank You.”