Today I was in the waiting room with my 2.5 year old, unfortunately having to endure some bronchitis-like cough and ear infection. (sorry C for passing on my poor lungs to you and presdisposition to getting bronchitis). A woman with a child who was gigantic looking but probably somewhat close to my child’s age, due to his mannerisms, was next to us.

“How old is he?” she asked. A perfectly normal question and one that I’ve asked sometimes. Although I tend to now be able to tell an age more by the kids’ actions than size.

“He’ll be two and a half in January,’ I said. Her jaw dropped on the doctor’s office floor.

“Uhh, yes. I think.” I had to quickly think about it; math was never my strong suit. “Yep, next month he’ll be two and a half, so whatever that is in months.”

“Oh WOW, my kid isn’t even two yet!” She exclaimed. She just kept staring at me waiting for me to say the inevitable. “Yes, he’s small for his age.”

The thing is, I don’t think about how small he is. To me, he is just this beautiful, wonderful, little boy who is smart and curious and generous with kisses and “I love yous.” He doesn’t let his size keep him from doing other things and proudly boasts, “I do it,” whenever he is trying to climb a mountain or the couch. He is becoming fiercely independent and doesn’t let his size get in the way of anything.

My son was born three weeks early. My pregnancy was totally uneventful, healthy and thankfully, very normal. They prepped me the whole time for a big baby and said he was measuring ahead. But I knew the date he was conceived so I knew the math was right (in this case my math was good!). We discussed the possibility of a C-section and I prayed that would not be the case. So when my water broke at home at 37 weeks, I was a little surprised. But I was even more surprised when they told me he weighed 6.0 pounds. Wow! So much for my big baby.

He has always been small. I’d be lying if I said I didn’t worry about it some. Being a small girl is one thing, but a small boy opens up an entirely new set of problems. I envision him being picked on or bullied. But then I only let those visions take over for a few seconds before I am interrupted by his bright blue eyes asking for this or telling me to watch him do something or other. I am not allowed to think for too long that anyone could find him anything but wonderful, talented, hilarious and unique.

But it bugs me when people act as though their large kid equals a better kid. Or a smarter kid. Or a this or that kid. Because it’s not true. Just as the child with a mental disorder or a physical handicap is as beautiful as mine. People are so closed-minded and rude at times. The growth charts exist as parameters not measures of success. C has never been above the 10th for much. He’s in the 2nd for weight. He is 29 months and we wear 18-month pants. Sometimes 12-18 months. But it fits and that’s what works for us. 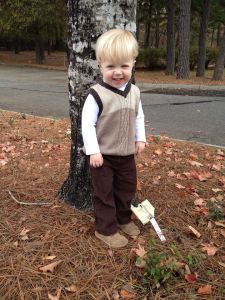 Small but my sweetheart

My personal mothering mantra has always been, “do what works for you and don’t judge others.” Just because I breastfed for six months doesn’t mean I’m better than my friends who didn’t. Because I also have friends who did for a year. And they’re no better than me. And just because my kid can spell his name, doesn’t mean he’s better than a kid who can already ride a tricycle or draw a perfect circle. It’s all just what they learn, when they learn it and what they like. And everything has its own pace.

Sometimes, size DOESN’T matter and I hope people can remember that.